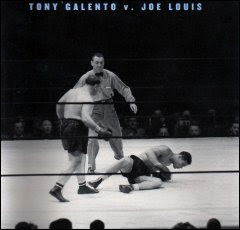 In an era of tough men, Tony "Two Ton" Galento was a standout. Although he would never win a Mr. America contest, his left hook could knock down any man, including the legendary Joe Louis. Tony owned a bar in Orange, New Jersey, didn't train, drank beer and ate large meals before he fought. Between 1928 and 1944 he fought 110 times, knocking out 56 of his opponents. 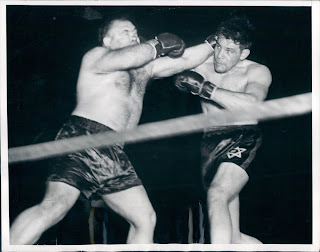 He met the Baer brothers in back to back fights later in his career, losing both bouts, but not before knocking 6'7'' Buddy Baer down. The famous fight with Louis occurred at Yankee Stadium in June of 1939, before Galente beat Lou Nova in the infamous dirty fight. Tony was king of the world in the third round as Louis lay on the canvas, but he got up at the eight count, and knocked Galante out in the next round. Louis would later say that Tony Galante was one of the toughest men he ever fought. 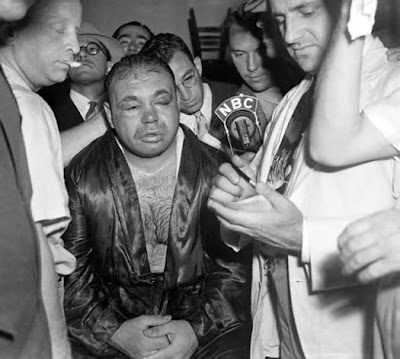 post reprinted from May 30, 2010, bottom photo, after Lou Nova fight, added
Posted by michael molovinsky at 5:03 AM