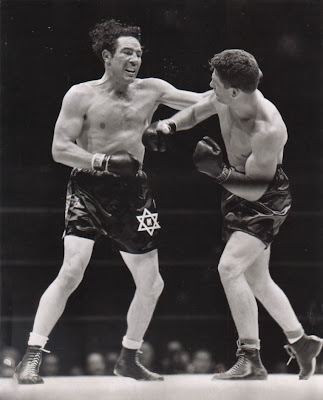 In California these days, everybody walks around with a yoga mat strapped to their back. That certainly wasn't the case in the 1930's, when heavyweight contender Lou Nova studied yoga. Nova was the World Amateur Heavyweight Champion and a proponent of clean living. He won his first twenty two fights as a professional. His promoters said he perfected the Cosmic Punch. Only 6'2", he fought in the era of giants. He handed giant Abe Simon his first defeat after thirteen victories, eleven by knockout. Nova knocked out 6'4'' Max Baer twice. The 1939 knockout is one second away, in the above photograph. Baer himself had won the championship by knocking out Primo Carnera, the Italian giant who was 6'6" and weighed 284 lbs. Baer lost the championship to the Cinderella Man, Jim Braddock. Joe Louis took the belt from Braddock and held it for twelve years, being arguably the best fighter in history. Clean living didn't serve Lou Nova so well with the notorious dirty fighter Two Ton Tony Galento. Galento almost gouged his eye out, putting him in the hospital for weeks. Nova got his shot with Louis on September 29, 1941, but fell in six. Nova would go on to act in movies and even was a write-in candidate for President of the United States. He dropped out of the campaign because his mother was afraid he would catch a cold shaking so many hands. She wasn't afraid of him being in the ring with some of the toughest men in the world.

reprinted from December of 2012
Posted by michael molovinsky at 4:26 AM