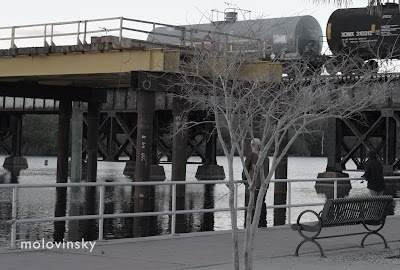 While Biden and the new administration are promoting their $Trillion dollar infrastructure program,  and an improved Amtrak would supposedly be a benefit,  the Republic Of Florida has its own program, with no cost to the taxpayers.

The privately owned high speed train has been operating since 2018 between Miami and West Palm Beach.  Richard Branson, who spent this past weekend near outer space, envisioned a high speed Virgin Train brand between Orlando and Miami. While Virgin is no longer involved with the project,  the extension from West Palm Beach to Orlando is being built.  The Brightline extension requires seventeen new bridges and 170 miles of track. The new track is next to the old existing single track, now in use for freight.

The project is not without controversy. While very few towns would have a station or benefit from the high speed line, the train will be speeding through them.  A concern is the danger imposed by such high speed at all the crossings.

The new bridges are a massive undertaking. Shown above is the bridge construction over the Crane Creek in the Space Coast area.  A temporary bridge was constructed to hold the massive equipment necessary to build the new bridge.

Florida was developed a century ago by Henry Flagler and his train company. Private enterprise does still exist.

Posted by michael molovinsky at 6:01 AM