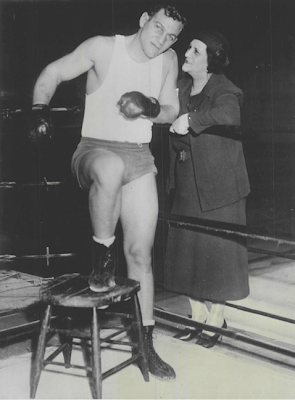 In 1964, a young Cassius Clay trained in south Miami Beach for his first fight against Sonny Liston. At that time, this section of the city was home to mostly retired Jews on fixed income. The hotels, decades after their prime, became pension rooming houses. Decades later, these same buildings would be restored to their art deco splendor, creating today's South Beach. As Clay trained, a middle aged punch drunk necktie peddler told him, "After Liston punches your head, you'll be selling ties with me." The street peddler was a fixture in Miami Beach. He didn't ask, he told people they were going to buy a tie. The future champ probably didn't realize that the heckler was none other than King Levinsky, legend of the 1930's, and veteran of over 118 heavyweight fights. Levinsky was born Harris Krakow in Chicago, and worked at his parent's fish market on Maxwell Street, the Jewish section during the roaring twenties. Although he never got a title shot, and weighed only 185, he fought all the leading heavyweights of his time, including the 265lb. giant, Primo Carnera. Managed by his sister Lena, he was known never to turn down a fight, including those against Max Baer.

reprinted from February of  2009

photo shows Levinsky with sister/manager Lena in 1932
Posted by michael molovinsky at 5:07 AM