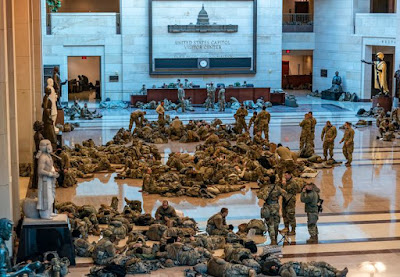 I don't know anything about the danger to Biden's inauguration from Trump supporters, but I do see a clear and present danger from the massive security put in place.  Young guardsmen will return to their communities from all over the country, after having spend over a week in close quarters with each other.  Many of these young people, in addition to no social distancing, were maskless much of the time.

Security for January 20th,  appears to be an overreaction from the mistakes of January 6th.  The ceremony could have been staged in a secure location,  instead of bringing over 20,000 troops to Washington.

Prior to January 6th,  Tea Party groups and others openly organized bus caravans to that rally. Locally, I have heard of no such organization for this coming event,  plus Washington will be closed to the public for the inauguration.

I cannot understand why this massing of guardsmen and other security isn't recognized as the surge event it will unfortunately become.

UPDATE JANUARY18,2021: While no security threats materialized over the weekend, the surge event expanded. Guardsmen now number over 25,000 in Washington DC. One hapless fellow was arrested in DC for having a handgun in his vehicle with a brick of ammo. Turns out that he is a security guard, and the gun is licensed in Virginia. In Harrisburg, all that could be found was a couple of anti-Trump protesters.
Posted by michael molovinsky at 3:19 PM