Looking For News In The Trump Era 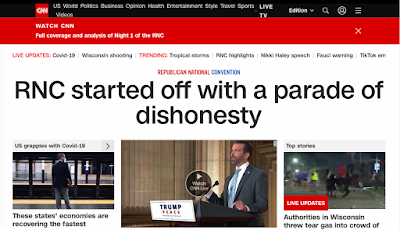 As a blogger it's important that I stay informed.  Even before the previous election in 2016, a few media companies made a business decision to choose a target audience, with no pretense of objectivity.  As the Trump administration progressed, or declined depending on your point of view,  the concept of objectivity became a rare commodity, perhaps even extinct.

Regardless of how one feels about Trump for president, certainly the sequence of minority speakers at the Republican convention's first night was inspirational.  For CNN to portray the evening as a parade of dishonesty is ironically dishonest.  Even more unfortunate is the former institutions of journalism, such as the NY Times and Washington Post, which now feel morally justified slanting the news.

What will happen to CNN if Trump wins again in 2020? I suppose that they could continue their format, but such an agenda eventually completely erodes credibility. At what point does it become a tabloid at the check out rack, next to the National Enquirer with the Space Aliens Among Us?
Posted by michael molovinsky at 7:20 AM