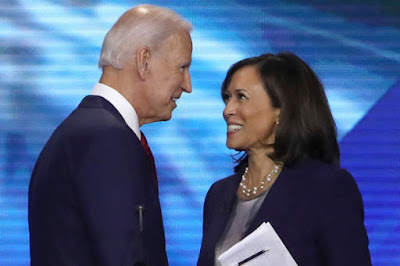 In one of the Biden's first interviews since the convention,  he said that he didn't feel any pressure to choose a black woman for VP.   Of course, in reality, the only suspense was which black woman was he going to pick.

Black women are a big block in North Carolina, and that state was a big factor in Biden's primary win.  When he obligated himself to picking a woman,  Harris's nomination was practically a done deal.

In Biden's final short list, four out of six women were of color. Among the black women, Harris and Rice were immensely more qualified.  While Rice has extensive international experience, she also had some associated baggage.

When I questioned this blog's Democratic focus group, they all replied what else could he say?  In their minds, no big deal there. After all, it's not like one of Trump's lies.
Posted by michael molovinsky at 8:00 AM