Journalism And The Southern Strategy 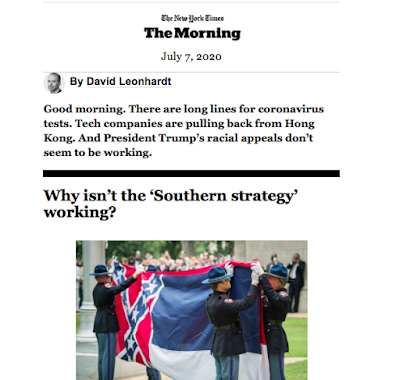 Even before Trump took office in 2017, I noted on this blog that the Pink Hat Movement was unprecedented for a not yet inaugurated president. Before too long those feelings were labeled Trump Derangement Syndrome. That term quickly lost favor. With so many people so vehemently opposed to Trump, it became assumed that anybody who felt less or differently must be the one with some psychological disorder.

While some media companies with market share targets took sides before the election, there still remained those journals interested in objectivity. As a lifelong student of media, I found the reaction to Trump fascinating. His opponents, no matter how sophisticated in media/message, have come to believe that they are opposing the devil, and that his end justifies any means.

Prior bastions of journalism, such as the Washington Post and New York Times, have also abandoned   objectivity...defeating Trump is now seen as a crusade, a righteous mission.

Yesterday, the Times published a headline that Trump's Southern Strategy of using racism is failing. Two years ago such presumptions of strategy, much less racism, would have only appeared as an opinion piece, if at all. The supposed firewalls between news and opinion apparently no longer exist. A month ago, Senator Tom Cottons' piece calling for Trump to quell the riots resulted in the resignation of the Times opinion page editor.

I don't know what is going to be taught in journalism courses as our colleges attempt to restart. I do know that ideals of objectivity can go into the newspaper museum, right alongside of the old lead letters used to set type.

ADDENDUM: This post was intended  only as an observation about the current state of journalism,  not as an evaluation of candidate Trump.  In addition to molovinsky on allentown,  I also publish another blog,  Rainy Morning Chronicle.  Rainy Morning has a facebook page where I occasionally boost the posts.  Facebook,  while constantly prompting me to use the paid service,  rejected the link to this post.
Posted by michael molovinsky at 4:46 AM