Poor Neighborhoods To Get More Dangerous 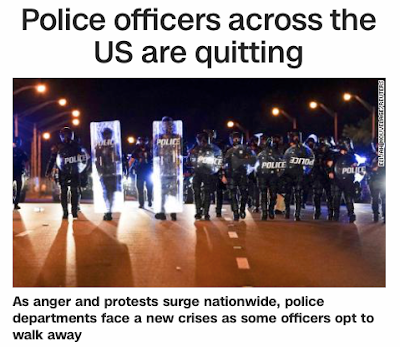 When police officers several years ago in Baltimore were castigated for hosting some rough patty wagon trips,  police enforcement, and ultimately protection, took a slowdown in that city.  I expect to see a stand down now around the entire country.

In this current climate of scrutiny by the public, and officials more concerned with their reelection than actual public safety,  a dangerous, thankless job is now becoming a losing proposition.  When coming home from the job requires quick responses,  and everybody is a judge with a surveillance camera,  why would a policeman want to jeopardize himself protecting your property or life?

How ironic is it that "Defund The Police" was a slogan heard at riots and lootings?  Some woke large city officials want to instead divert those funds to social programs.  An activist in Minnesota  said, "We're safer without armed, unaccountable patrols supported by the state hunting black people."

I don't think that they will be safer.  Matter of fact,  I think that life has gotten far more dangerous in poor neighborhoods in the last couple of weeks.  There will be a few less complaints against the police,  but much less protection against the predators in those neighborhoods.

above photo and caption from CNN
Posted by michael molovinsky at 5:44 AM