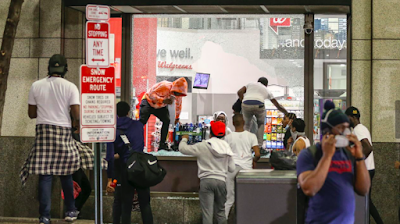 Back on May 4th, before the death in police custody in Minneapolis, I wrote about Philadelphia Police Commissioner Danielle Outlaw.  She instructed the police force not to arrest for minor infractions, like theft and prostitution, during the virus crisis. Large groups of young people were running amok in center city Philadelphia convenience stores,  scooping up everything their backpacks could hold. Meanwhile at City Hall, woke mayor Jim Kenney stayed silent about this decline in civilization. Only after a couple weeks, after a merchant and citizen backlash, did Outlaw and Kenney finally reverse policy.

Philadelphia inner city kids were taught a bad lesson by their police commissioner and mayor.

Perhaps with that lesson fresh in their mind, some of them may have graduated to the looting this past weekend.

My first reaction to the looting on Walnut and Chestnut Streets was that the police must have stood down. How could looters smash windows and enter a Wells Fargo Bank without being stopped? How could all that theft and destruction only result in 13 arrests Saturday night?

I realize that there are a limited number of police and that Philadelphia is a large city. While I can't pass judgement on the police response, I will on the looters shown above. I do not believe that their thinking centered on George Floyd and institutional racism, but rather about what they could steal.

Here in the Lehigh Valley, the mayors and police chiefs conveyed their commitment to social justice.  But more importantly,  the local protestors expressed their hopes and solidarity in a lawful manner.