Reflecting On Camera And WW2 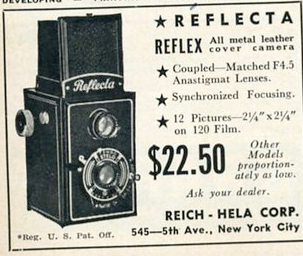 We are all being challenged by the "Stay At Home" order, and the stress from the reason for it.

Over forty years ago, for a short period, I operated a photographic darkroom in center city. During that period I purchased a box of camera accessories from a then-old camera dealer. These objects are what is referred to as new old stock. Among the items in their original small boxes is a lens hood, from the Reich-Hela Corporation. For what camera was this shade produced?

You won't find much about the Reich-Hela Corporation on google. However, I did discover that they applied for a trademark, Reflecta, for a camera in 1937. It turns out that this camera, with the same logo, named Reflecta, had already been produced for years in Germany, by Richter Company. While that camera manufacturer went through a couple of ownerships, and was even distributed by Sears and Roebuck under a different name, there exists no other mention of the Reich-Hela Corporation, except for one... In 1944 they are listed as a contractor and producer of technical journals for the United States Department of Defense.

I don't know how you spent Sunday, but this was one day in the life of a shut-in blogger/photographer.
Posted by michael molovinsky at 4:54 AM