Looking For A New Political Tribe 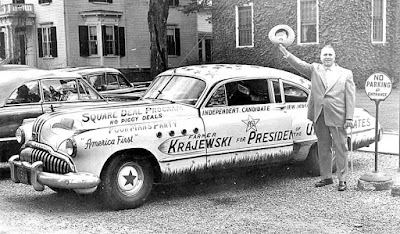 Swimming upstream is nothing new to me, I have never been in calm waters. Recently when I decided that I must cut bait with Donald Trump, I assumed that there would be plenty of tents available to me. I have always considered myself a conservative independent. What I'm finding out is that the country has become so polarized, that there only remains for or against Trump, nothing else.

Even such prestigious sites as AmericanThinker have a distinct slant, now pro Trump. While there are Independents Against Trump, there are no Independents for being independent. when I refer to independent, I don't mean that you won't vote for either party, but that your vote isn't based on party.

In addition to writing molovinsky on allentown since 2007, I have another blog titled Rainy Morning Chronicle. On that venue I place posts that are not Allentown centric, such as this one. If that's not enough of me, there are also two facebook pages...  Allentown Chronicles majors in Allentown history and minors in local politics. The facebook page Rainy Morning Chronicle mirrors the blog of the same name. If there are any other people out there who are not polarized,  perhaps you can direct me to your tent?
Posted by michael molovinsky at 4:00 AM