Reactions To My Trump Divorce 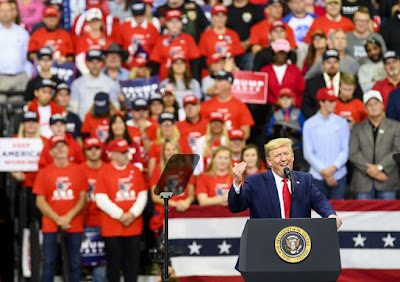 The push back against my divorce from Donald Trump was adamant. To a Republican friend, it was only a matter of time before I would be advocating  redistribution of wealth. When I republished the post on a conservative social media track, the nicest comment was calling me a traitor.

Because the straw that broke my support was the green light given Erdogan, I felt compelled to find informed analysis contrary to mine.  I say informed, because many Trump supporters don't seem heavy on that trait.  I did find some analysts who felt the Turks were coming anyway, and Trump either had to reposition our forces, or fight another ally, Turkey...  They discounted being able to dissuade Erdogan from crossing the border.  However, that viewpoint makes one doubt that Trump can now get Erdogan to slow down his attack,  despite threats of economic sanctions.

Getting back to this question of how informed Trump supporters actually are, I watched a segment of Trump's rally on Friday night in Minneapolis.  Many of those present were wearing red shirts and being delighted by Trump saying that "Biden kissed Obama's ass."  While some newscasters complained about how unpresidential that comment was,  all I could think of was the Jerry Springer show.

While it is apparent that those willing to dress in a red tee-shirt won't change their support of Trump over the plight of the Kurds,  how many are like me remains to be seen. .  My support for Trump didn't flip just because of the Kurds, but rather a build up of winces...you can only wince so many times.
Posted by michael molovinsky at 4:51 AM

Great hope more good people come to their senses how much can you take before you lose your soul.