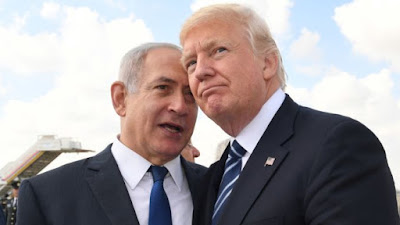 Jewish opponents of Trump were handed a paradoxical gift last week when Netanyahu switched course on Omar and Tlaib.  First, let's establish that most Jews are Democrats, and that Democrats dislike Trump, like no other president in memory.  Many of these Jewish Democrats only tolerated Netanyahu because of their affinity for Israel.  They would prefer a more liberal leader in Israel, even if Israel is in a constant state of seige.  The apparent rapport between the despised, and the barely tolerated, further annoyed them.

When Trump tweeted that Omar and Tliab hate Israel, and that no goodwill visit would ever change their attitudes,  nobody, including the most pollyanna,  could dispute that assessment.  On social media, one non-Jewish liberal after another, started commenting how they always had supported Israel, but that this decision changed their mind. One second later, they were already complaining that Israel should be more respectful to our congress, because of all the foreign aid that they receive.  Seems like it didn't take much to erode their support.

Israel survives in a hostile neighborhood by realizing that the few offers of truce that come their way, always serve the purpose of their enemies. Who would have thought that in the 21st century, that they would also have to contend with American Jewish opposition.
Posted by michael molovinsky at 8:06 AM

This situation is going South fast.I see Congresswoman Wild seems to be supporting Congresswoman Tlaib's anti-Israel rants.This morning I get a e-mail from A.O.C. demanding Americans to boycott Israel.Ms Wild better do a 180 on her position.How does Wild maintain political support when she apparently stands behind a boycott

It seems Congressman Tlaib is now going after Bill Mayer's show with a boycott.Where and when does it end.

What is the point of your article?