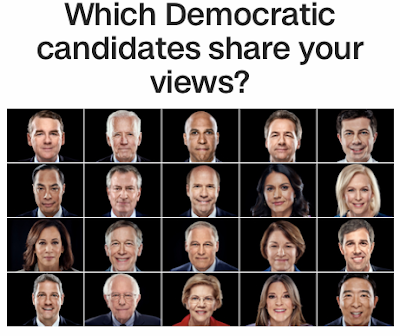 Yesterday,  molovinsky on allentown featured one of my posts from the Joe Louis boxing era. During that period people would sit around the radio and listen to the event. I do not get CNN on my limited television package, so I ended up listening to some of it on my computer.

I mostly heard people interrupting each other, with Elizabeth Warren being the main interrupter. I did hear Bernie Sanders say that He wrote the damn bill. This morning I read that it was the knockout line of the debate. Before I fell asleep, I also heard him say that under his plan I could get a hearing aid with my medicare. I could use that.

I understand that the rest of the tournament is tonight. Because I keep baker's hours, I couldn't stay up that late even if my TV received CNN. But, I figure if Joe Biden can stay up and stand on the stage, I should be able to stay awake long enough to listen to some of it.  Anyway, who knows what I'll get promised tonight?
Posted by michael molovinsky at 7:58 AM