Free Speech In Our Political Climate 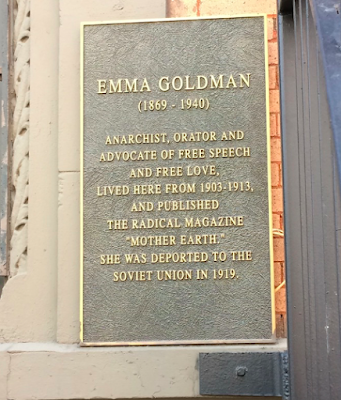 I'm a sucker for historical markers. Whenever I see one, I stop and read it. The marker shown above is on a brownstone on E. 13th Street, in NYC.  I wasn't familiar with Emma Goldman.  For her free speech she was arrested several times, imprisoned, and eventually deported back to Russia, from where she emigrated as a young woman.

A Democrat candidate for Northampton District Attorney lost supporters and her campaign manager because in 2016 there was a Donald Trump sign on her side door.

The Trump Derangement Syndrome is so strong that anything less than totally hating him is considered consorting with the enemy.  When the result of a differing political opinion has such a consequence, is freedom of speech impeded? I believe that indeed it may be.

A facebook friend posted that Trump and his corrupt family have to be surgically removed from our Government. I no longer believe we can wait until 2020. Writing that about another president, in another time, might have been considered seditious.

We have entered a period where any present or even past consideration of Trump is the sole litmus test for a candidate.
Posted by michael molovinsky at 5:32 AM