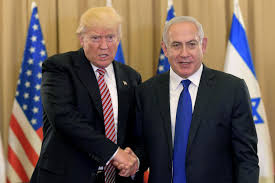 These are trying times for American support of Israel.  As Democrats and the media obsess against Trump,  that vilification is being smeared on Netanyahu, and Israel itself. The media is delighted by corruption charges against Netanyahu, and paints him and Trump as brothers from the same mother.  Between Netanyahu being described as Trump's friend,  and new critics of Israel in Congress,  American support is being tested.

This new packaging of Israel by the left creates a dilemma for American Jews, who overwhelmingly vote Democratic.  I'm sure that support of Israel will remain as part of the party's platform,  but historical canards about Jews and Israel will only increase in the new climate.
Posted by michael molovinsky at 10:42 AM