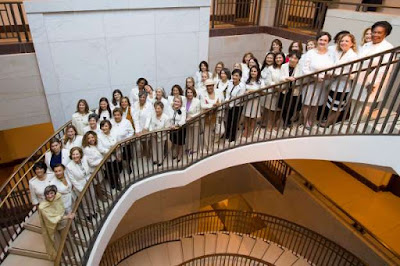 Often  in the course of blogging I offend a few people, sometimes many more.  When I saw all the congresswomen dressed in white, although I know that it was supposed to represent homage to the suffrage movement,  I thought that it would be more liberated not to be in any costume.  Of course the women also didn't show much individuality by demeanor, either being stern faced or all clapping at the same time....They looked like a choir, being led by Nancy Pelosi.

The congresswomen with political ambition beyond the choir, Elizabeth Warren, Kamala Harris and Kirsten Gillibrand, dressed themselves, but not in white.
Posted by michael molovinsky at 5:17 AM