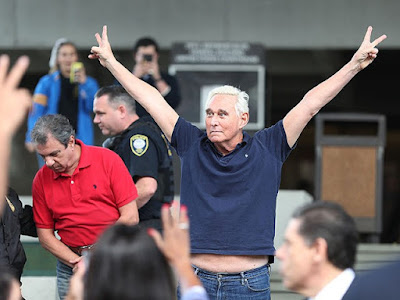 Diviners of this blog know that I'm conservative, but not partisan.  I recently received a call complaining that my recent posts were too nostalgia driven,  with not enough local politics.  Although, I'm planning to address that complaint in the near future,  today's post takes us national.

As one who does not suffer from Trump Derangement Syndrome,  I can still appreciate the theatrics of Trump ending the shutdown, juxtapositioned with the arrest of Roger Stone.  Add Stone doing the Nixon salute,  and the weekend was setup for liberal madness.  I almost expected to see dancing in the streets,  Rio style.  When Stone came out of his arraignment in Fort Lauderdale, and stated that his arrest was political,  while the liberals in the street were shouting lock him up, he seemed to have a point. When the FBI raided his house at 4:30AM, SWAT style, and CNN was there, Stone seemed to have a point.

As I write this early Saturday morning,  I'm sure that that the writers at Saturday Night Live are up and at it also, unless they too were tipped off... then they probably started the rehearsals earlier this week.
Posted by michael molovinsky at 7:37 AM