The Resignation Of James Mattis 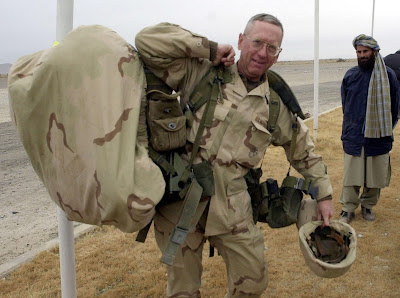 Jim Mattis was a hybrid general...part Mad Dog, part intellectual. Between his military retirement  and his appointment as Defense Secretary,  he was the Annenberg Fellow at the Sanford's Hoover think tank. He was equally at home reading Paul Linebarger's classic 1948 Psychological Warfare, or sleeping in a foxhole in Afghanistan.  As Commander of the Joint Forces, and then NATO,  his commitment to allies was bedrock.  When Donald Trump announced our withdrawal from Syria,  Mattis could no longer in good conscience serve as our 26th Secretary of Defense.

That decision by Trump also cost us the service of Brett McGurk, who was the leading envoy in the war against ISIS.  It is my hope that John Bolton remains as National Security Advisor, and that Mike Pompeo stays on as Secretary of State.  The country needs Trump receiving good advice, even if he fails to listen.


Mattis arriving in Afghanistan in 2001 to take command
Posted by michael molovinsky at 5:18 AM