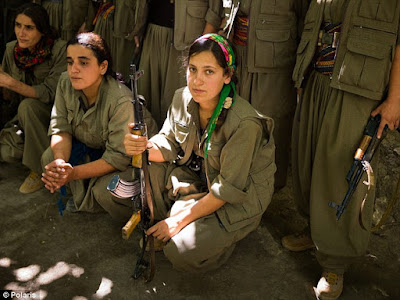 The Kurds are a stateless ethnic minority that live in parts of Iraq, Iran, Syria and Turkey. They had provided the only security afforded to Christians and other minorities in Iraq.  They have been on the front line fighting against our common enemies in both Iraq and Syria.

Kurdish forces in Syria are considered a nationalistic threat by Turkey, which has announced intentions to attack them. Donald Trump's announcement to withdraw ground forces from Syria seems to clear the way for such actions.

The Kurds once again will be left to their own devices for survival. If we have returned any favor for their help against Isis, it is not apparent.

Likewise, Israel will be defending against Iran in Syria by itself. With John Bolton being part of the administration, I had hopes for more engaged resolve.

pictured above Kurdish female fighters
Posted by michael molovinsky at 4:55 AM