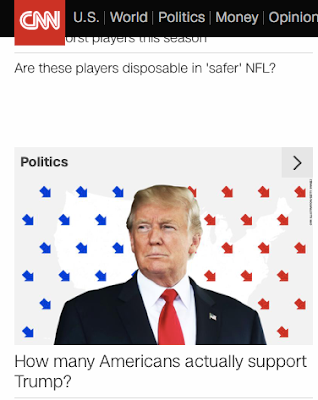 The hatred of Trump has changed the nature of journalism in the United States.  While several years ago certain select media were known for their bias,  now it's become difficult to find an impartial source.  Both CNN and The Washington Post have foregone any pretense of objectivity.  My use of the word bankrupt in the headline refers only to journalistic integrity,  the slanted news may well be very profitable.

While CNN and The Washington Post presented Trump as a laughing stock at the UN,  The Wall Street Journal presented his speech without such editorial comment.  Although he may be both inarticulate and undiplomatic,  he is correct that we have been bankrolling those who oppose our own interests.

Last night 2, 499 liberals and one conservative attended the Joan Baez concert in Philadelphia.  After the show, Ms. Baez took a knee and told the audience that they must resist.  Although her sincerity is beyond doubt, I wondered what improving matrix she actually opposes....
Posted by michael molovinsky at 5:58 AM

I found this interesting quote about the 'collective', AKA Deep State:

The Collective preaches the tolerance of transgender men in the bathrooms of our daughters and wives while actively bullying and defaming those they consider as dissidents. Falsehoods from contrived, and illegal, government “leaks” are published and broadcast as being true while real facts are slandered as “fake news”.


A public that can no longer distinguish between truth and fiction is left to interpret reality through illusion. Random facts or obscure bits of data and trivia are used either to bolster illusion and give it credibility, or discarded if they interfere with the message…

When opinions cannot be distinguished from facts, when there is no universal standard to determine truth in law, in science, in scholarship, or in reporting the events of the day, when the most valued skill is the ability to entertain, the world becomes a place where lies become true, where people can believe what they want to believe. This is the real danger of pseudo-events and pseudo-events are far more pernicious than stereotypes. They do not explain reality, as stereotypes attempt to, but replace reality. Pseudo-events redefine reality by the parameters set by their creators. These creators, who make massive profits selling illusions, have a vested interest in maintaining the power structures they control.