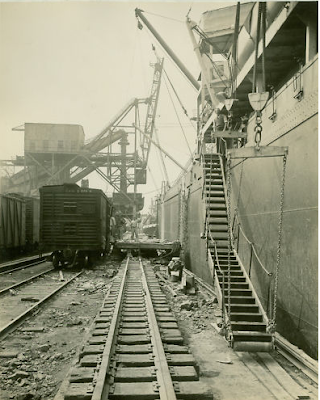 In this era of class warfare, while we worry that the rich are only paying 35% income tax, instead of 39%, let us be grateful that once upon a time we had the Robber Barons. In this era when we have to pay their mortgage for developers to build on Hamilton Street, let us be grateful that men built railroads with private money. Let us be grateful that incredible feats of private enterprise built piers, bridges and trestles. Trains allowed us to move vast amounts of raw and finished materials across America. This network allowed us to protect ourselves during two World Wars, and provided the prosperity upon which we now rest.

The Lehigh Valley Railroad tracks extended from their piers in New Jersey to the shores of Lake Erie. The Mile Long Pier in Jersey City was the scene of German sabotage in 1916. A train full of munitions, awaiting shipment to Europe, was blown up on July 30th of that year. In 1914, the railroad built the longest ore pier in the world, in Bayonne. The ore would come from Chile, through the new Panama Canal, for shipment to Bethlehem, Pennsylvania.

Posted by michael molovinsky at 4:09 AM