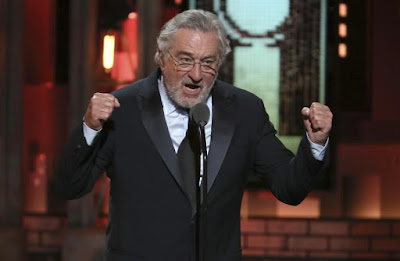 Well over a year ago I wrote about a new Trump induced mental illness, which the psychological world would have to identify and name...They have, and they're calling it Trump Derangement Syndrome.  The media is using the term to describe Robert De Niro's F-bomb rant about Trump at the Tony Awards.  Of course ranting about Trump at award shows by the current and former Hollywood pretty boys and girls has become the norm.   I suppose Trump and the Me-Too Movement give the superficial Dress Up Nights some social meaning.

What I find interesting about this predictable behavior at these shows is an unintended result. While they are preaching to their choir,  they are also creating a backlash of support for Trump.  They are framing Trump as an underdog,  harassed by the Elites.  What is De Niro going to do at the next show,  drop his pants and moon Trump?
Posted by michael molovinsky at 4:03 AM

I am sorry, but I still say, F**k Trump....perhaps I have the syndrome.

Fascinating and sad to watch these liberals losing their minds. And at the same time they validate Trump and us supporters of Trump. Go Trump.

What they did next is give him a standing ovation.

DeNiro can go anywhere. Trump can only go on Hannity or to rallies in shithole red states where he can sell the rubes more MAGA hats.