No Credit Ever For Trump 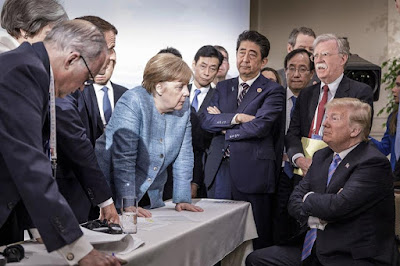 In the media, especially dominant CNN,  Donald Trump gets no points for his historic breakthrough with North Korea...  Instead he is accused of abetting our enemies, and abandoning our allies.  Never mind that the North Korea breakthrough involved significantly reducing the threat of nuclear war, while the discord in Canada deals with the price of diary products.  Never mind that both actions were calculated to put United States first.

Not giving Trump any credit is even fashionable in the Republican Party. The party hierarchy has taken a wait and see attitude.  Needless to say, the Democrats are outright hostile... "President Trump has granted a brutal and repressive dictatorship the international legitimacy it has long craved," proclaimed Chuck Schumer.

Trump will remain politically a populist outsider. He can govern without being embraced by his Party. How the Party will fare remains to be seen.
Posted by michael molovinsky at 3:28 AM

It is proof that there is a deep state. Both the Repub's and Dem's - opposite sides of the same coin. Their main goal is to stay in power and enrich themselves. Doing nothing is better than risking raising the ire of the electors.

This is why Trump is so hated by both parties: He's not an insider, not one of them, and is actually getting things done - as opposed to the gridlocked Congress.

The most troubling aspect about Trump's election is the reaction, of the people on the left. It seems they don't want to accept the results of the election - which I interpret as they want a Dictatorship, and all Democrat / Progressive government - much like they have in major metropolitan cities ( Philly / Baltimore / Chicago / LA / San Francisco )

Trump derangement syndrome AND blind worship are BOTH problems in a hyper-partisan world where identity politics reigns supreme. Remaining level-headed is a rarity. Being neither deranged or a worshipper my question is - what exactly was "historic" here? NK has made pledges to denuclearize just like this many times last 20 years.

We have yet another verbal agreement by NK to de-nuclearize. (again, no breakthrough there...) So, the difference this time are the photo-ops and hooplah that always follows President Trump.

As for the effectiveness of this summit, that remains to be seen. Again, half of NK's nuclear tests have been performed since 2013, despite many anti-nuclear declarations signed over the last previous 20 years.

So we can't really measure anything right now. The devil will be in the details of written agreements and a verification program. It's premature to call this "historic" or a failure. We need to see a verification agreement.

Personally, I think all dialogue is good. Would prefer not giving a brutal murderous dictator (who recently fed his uncle, a potential political rival to dogs). So on this rare occasion, Schumer does have a point. But, Trump operates outside the box and demonstrated effectiveness in doing so. I give him a wide berth.

although i prefer not to reply to comments, meeting with N Korea is historic in itself. likewise it was historic when nixon went to china.

The idea that Trump can "govern" without Republican support is wrong. Since he has NO Democratic support, he needs an enormous GOP majority in the House (at least 15 in order to compensate for any few remaining Blue state reps that might defect on a given vote) AND at least a 2 to 3 majority in the Senate. If anything resembling a Blue Wave occurs in November and the GOP majority is shaved somewhat (as is the usual historical trend) then his agenda is toast. Furthermore, if a LARGE Blue Wave materializes then the pressure on him to not to run again will be enormous, and the "out" of declaring "Victory" and handing over the reins to Pence will be irresistible to him, as he would not want to risk his "legacy" by losing in 2020.
No good news for Trump is possible to emanate from the federal/state convictions of Trump associates and the final Mauler Report.

Outside of the reich right wing talk radio & Fox Faux "News" bubble, no one else takes seriously any longer Trump's BS. It has run it's course of believably, and only the dotards
buy it. Even mainstream Republicans now pay more attention to the news about Rudy's 4th infidelity blowing up his latest marriage and the raccoon climbing the skyscraper than they do of Trump's "achieved denuclearizing North Korea" nonsense.