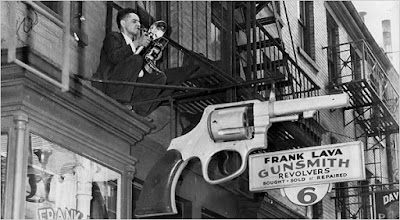 Starting in September,  no NYPD officer will still carry a classic American revolver. The change in policy will not be noticed by the public, because there were only about 150 officers still using a wheelguns, out of 34,000. In 1994, the department officially switched over to semi-automatic pistols, but officers at the time could still opt to remain with their Smith*, Ruger, or Colt. That means that any officer still carrying a revolver has been walking the beat for over 24 years.

It also means that there will no longer be an American gun manufacturer filling the holsters of NYPD.... the new weapon choice is either Glock or Sig Sauer.

*most duty revolvers were Smith&Wesson, model 10 or 64.
Posted by michael molovinsky at 5:03 AM

Worry not. Before long DiBlasio's NY will take away the revolvers of police officers.

The reasons are two fold:

1. Officers were hopelessly out gunned by the bad guys. NRA lobbying & purchase of legislators at the state & federal level unleashed a veritable flood of high power guns that civilians didn't have in the 1920's - 1950's.

2. Sales to police departments became hopelessly corrupt as foreign makers spent big to woo and win local contracts. Great source of kickbacks. Movies/TV shows emphasized the razzle dazzle of these guns via paid product placement. There is no sex appeal to the old 38 revolver.