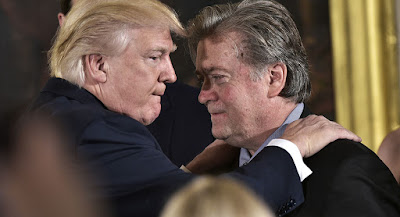 Fareed Zakaria's interview with Steve Bannon on CNN gave middle America a unique glimpse into the strategist who helped elect Donald Trump.  Bannon's background in finance and political publishing had helped him flesh out the populist movement in America.   He totally dismisses the personal insults of himself by Trump, and instead praises Trump for starting to renegotiate our place in the world economy. On the other hand, he didn't hesitate to disagree with his former boss about Jeff Sessions, who he thinks is doing an excellent job.

Bannon sees Trump as a populist managing to work within the Republican establishment.  The Bannon/Trump plan is to curtail immigration, both illegal and legal, which they regard as steady source of unfair competition to American workers. Likewise, tariffs must be put in place to stimulate American manufacturing. They credit the plan for the historically current low employment rates for black workers.

Bannon even sees the current polarization of the country as a positive, reflecting the deconstruction of the previous status quo. He believes that the November midterms will indeed be a referendum about Donald Trump.
Posted by michael molovinsky at 4:40 AM

I believe Bannon, beginning about 2012, helped engineer the Trump victory. The other major helper being a foreign power which will remain nameless. That said, I think the victory will be shorter lived than even the Tea Party.