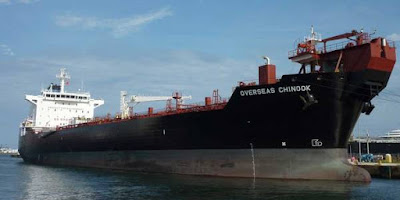 The Overseas Chinook was built in the Philadelphia shipyard by the Aker Company in 2010. The oil tanker shuttles between the Sabine Pass Refinery in Louisiana, and Port Everglades in Fort Lauderdale.   Credit former mayor/governor Rendall for advocating to continue shipbuilding at the former Navy facility.  It was a joint effort between the federal government (Jones Act), Philadelphia and Pennsylvania.  The shipyard provides high quality jobs, building real things which continue to serve our economy.  Pennsylvania is now trying to induce Amazon to locate their proposed east coast headquarters in Philadelphia.  Coincidentally,  the Amazon campus would be on the business park section of the navy yard.

Amazon has issued requests for proposals to American cities, claiming that the new headquarters might eventually employ up to 50,000 people.  Amazon sells things mostly made in China to American consumers over the web.  In the process they are essentially putting the brick and mortar retail sector out of business. The incentives offered to Amazon from Philadelphia alone are valued at over a $billion dollars.  While Philadelphia would benefit from Amazon,  I find it ironic that this virtual monopoly can demand subsidies, while decimating our shopping malls.

Posted by michael molovinsky at 5:15 AM