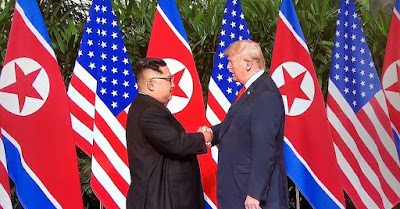 While the media in the United States generally is beyond skeptical and critical of Trump's summit meeting with North Korea, the rest of world recognizes the meeting as historic.  Most articles outside of the USA start out with... U.S. President Donald Trump and North Korean leader Kim Jong Un pledge to work toward complete denuclearization of Korean Peninsula.  This is not to say that they're reporting this as a done deal, but rather giving the intentions of Trump and Kim Jong-un some benefit of the doubt.

While the USA media dwells on Kim's human right abuses, we as a country have hopefully moved on from imposing regime changes.  To the rest of the world, where news doesn't have a marketing segment objective,  the historic meeting only increases optimism that a threatening rogue state may actually want to enter a new era.
Posted by michael molovinsky at 4:27 AM