Spongebaths For The Homeless At Starbucks 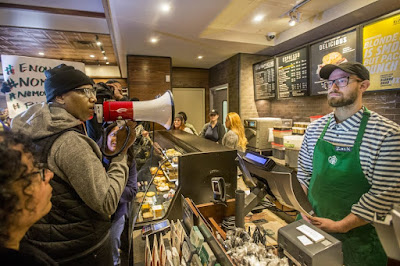 Starbucks, in their yearning to be politically correct,  has probably irrevocably degraded their brand, at least in the urban markets.   The policy of restricting restroom use to paying customers is standard procedure in large urban areas.  A white middle class woman told me that she was denied use of the restroom for not being a paying patron at the same Philadelphia Starbucks at the center of the controversy.

Apparently, it is a Starbucks CEO tradition to let PC race ahead of common sense.  Last year they promised to hire 8,000 immigrants.   While nobody is waiting for the immigrants before they buy their latte,  the homeless will start availing themselves of the restrooms.  While my liberal readers, all six of them, will welcom the better restroom facilities for the homeless,  their tune may change next time they use the bathroom in a Philadelphia Starbucks.

If Starbucks' corporate reaction to the incident wasn't enough,  now the Philadelphia Police Commissioner is walking back his previous support of the arresting officers.  He has apologized to the two men arrested, who refused to leave as instructed by the responding officers.  While only reinforcing victim mentality,  I don't see anything productive in these reactions.