Trump And The Jews 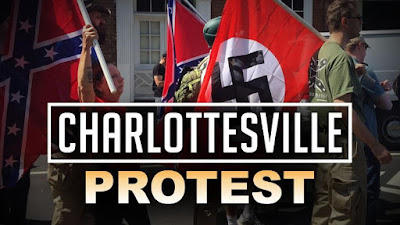 The Jewish reaction to Trump's statements about Charlottesville can be viewed within the larger political arena;  The overwhelming majority of Jews are Democrats, and voted for Hillary Clinton.  They join those who haven't gotten over the election last November, and bash Trump as the numerous opportunities arise.  That said, people marching with torches shouting Jews Will Not Replace Us leaves quite a jarring impression.

As a political conservative of the Jewish faith, I have no delusions about anti-semitism. I think that it is everywhere, just under the surface. I think that many non-Jews share the misconception that there is some secretive Jewish network,  helping Jews succeed at the expense of everyone else.  If such a network exists,  they must have misplaced my address.  These misconceptions have existed for almost two thousand years,  and I choose not to blame Trump for them.

Trump's presidency has been a series of poorly worded sound bites.  His background in commercial real estate development didn't require political correctness.  He was suggesting that everybody who was protesting against removing a statue of Robert E. Lee wasn't evil,  and that not everyone favoring its removal was pure in their intent.  He was not defending Neo-Nazis, or their  hatred of Jews and blacks. In our current era,  nothing elicits more reaction than an accusation of racism.  Even Mitt Romney joined the drum-beaters this weekend.  I didn't realize that he was interested in 2020.

Most of those criticizing Trump for not providing moral clarity last week would not be satisfied regardless of what he had said, or didn't say.
Posted by michael molovinsky at 7:28 PM

Semi qualified real estate developer, because of his father. Only says this and that to keep his base happy, his feet aren't firmly planted in American politics. Just a novice making lots of mistakes, with his base repeating, give him a chance!