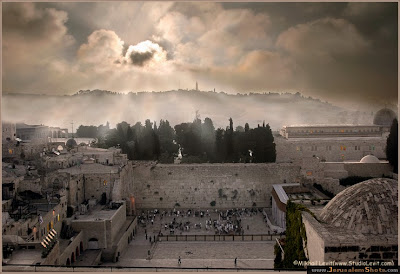 Isaiah 62:6-7
Upon your walls, O Jerusalem, I have set watchmen; all the day and all the night they shall never be silent. You who put the LORD in remembrance, take no rest,  and give him no rest until he establishes Jerusalem and makes it a praise in the earth.

There is no shortage to the international sentiment always aligned against Israel. Yesterday we were told that Trump's intention to move our embassy from Tel Aviv to Jerusalem could disrupt the peace process, and incite a violent pushback from the Arab world. As for the peace process, understand that Hamas controlled Gaza still calls for Israel's destruction. Understand that the Palestinian Authority on the West Bank financially rewards the families of their martyrs, when they kill Israelis. Violence in, and from the Arab world is a fact of everyday life, not tied to the peace process or our embassy's location.

Trump said in his statement on Jerusalem that he was acknowledging a reality. Another reality is that for 70 years Israel has been only tolerated, but never really accepted on the world stage. It survives in this harsh climate only because of courage.
Posted by michael molovinsky at 5:45 PM