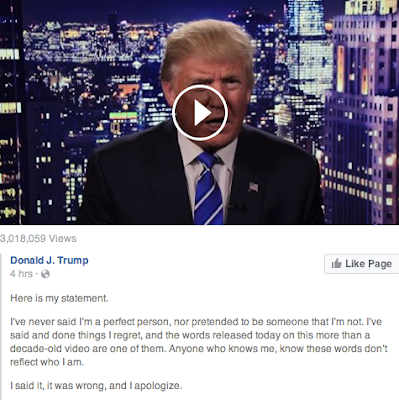 Our political traditions become more cut-throat each election cycle. We now have what has become known as the October Surprise. In this election, Clinton has been aided by a press hostile to her opponent, and the Washington Post did Hillary's dirty work for her. By Saturday morning Donald Trump had replaced Hurricane Matthew as the headline. The tape released on Friday certainly didn't disappoint any Trump haters. It provided all the proof they needed that the candidate has arrested development in his attitude toward women. However, as vulgar as the tape was, our political system now has its own vulgarity. Besides hearing it in Trump's own words, was anything unknown revealed? Trump's video apology was done well enough. Although, rather stiff and scripted, he did indeed apologize, and promise to be a better person. He also shared the blame with the Clinton's, accusing Bill of numerous sexual improprieties, and Hillary of complicity in covering them up.  We are no longer in the era of the Brady Bunch.  While it seemed somewhat like a juvenile excuse to mention the Clintons,  in truth. they had desensitized America to hanky panky by politicians, even in the White House.

From a ethical point of view, Trump's apology was inadequate, but this is politics. He managed to take the best shot against him, and essentially set the bar lower for himself with his upcoming debate with Hillary.  He once again seemed to be best about making lemonade,  if nothing else.

Trump, under incredibly adverse circumstances, spoke fairly well during the debate.  Despite the infamous tape released just two days prior, despite a format aligned with Hillary's experience, Trump managed to hold his own, and even put Hillary on the defensive.  However, Trump's new problem may well be the spectacle he conducted before the debate.  Bringing out Bill Clinton's former accusers was anything but the contriteness recommended by those knowledgeable in damage control. His body language during the debate, although improved since the first encounter, also lacked discipline

Another consequence of the 2005 tape was that Trump, in addition to debating Hillary, has to contend with numerous Republicans disavowing support.  As an independent, who is critical of partisanship, that jumping of ship amuses me. The first to jump were previously the last to support him.  Some pundits are declaring the Trump ship dead in the water,  and those on the undercard better jump to survive.  I believe that they are confusing this election with a regular campaign.  Trump's base will stand by, and those who have disavowed him may actually suffer.  Trump has always been an independent,  he was just running on the Republican ticket.   The Democrats and the media just assumed that the tape would make Trump unacceptable to all but the most deplorable.  I see no such movement by the public away from him.  Americans appreciate a sense of fair play,  and Trump may have actually gained some sympathy votes for the ploy against him.  All in all, like a hurricane, it made for a messy aftermath.

To commemorate the Trump tape release, I have placed a poster on How To Train Your Wife on this blog's sidebar, visible on the web version.  I should clarify that I too found the 2005 tape reprehensible. However,  if I had supported Trump before its release,  I would not change my vote because of it.  Trump supporters had seen the nude pictures of his current wife and accepted the fact that he's a political Hugh Hefner.  America has become jaded enough to know that Sunday school teachers don't win primary elections.  The web site Politico was portraying the Trump supporters outside Trump Tower on Saturday as only the diehard wacko's.   Many substantial supporters, wacko by no measure, are standing by Trump.  Their opposition to politics as usual in Washington continues, and they still see Trump as a possible vehicle of change.  Welcome to democracy in 2016.
Posted by michael molovinsky at 9:16 AM