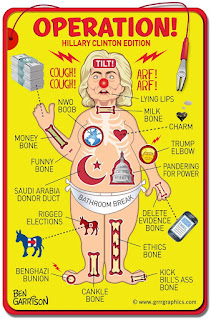 Nothing exemplifies the difference in media treatment more than the controversy about the candidates's health.  While Clinton literally collapses,  the liberal media is concentrating on the disclosure that Trump doesn't exercise.  To me, it doesn't appear that Hillary works out too much either.  Putting aside political bias,  it takes no doctor to see that Trump is in better shape.  Although that certainly doesn't qualify him as a better candidate,  it does disqualify any media pretense for objectivity.  Both of the candidates are pushing 70.  Many of us that age don't have the energy to attend a rally, much less give one every night.

As someone who is basically non-partisan, it has become more difficult to discern attempted truth in the news.  Truth seekers must mix numerous sources,  then go through an elaborate filtration process to distill small drops of it.  We have come to rely on those sources which lie the least.

illustration credit: Ben Garrison@grrrgraphics
Posted by michael molovinsky at 4:34 AM