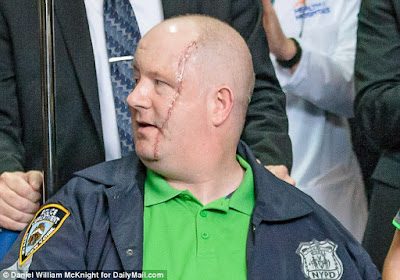 While another immigrant terrorized NYC with bombs this past weekend, Obama told the United Nations that walls only imprison us. He is so in love with the sound of  his own voice, that he doesn't understand how out of touch his words actually are.  While his words didn't even electrify the choir to which  he was preaching,  outside that building, his words were totally off-key.  He doesn't understand that Lady Liberty didn't mean to welcome blood hungry terrorists with meat cleavers. Pictured above a NYC cop, several days after being attacked by another terrorist just last week.

Obama is actively campaigning for Hillary Clinton.  He did her no good with his UN speech.
Posted by michael molovinsky at 6:07 AM