A History Lesson From Ukraine 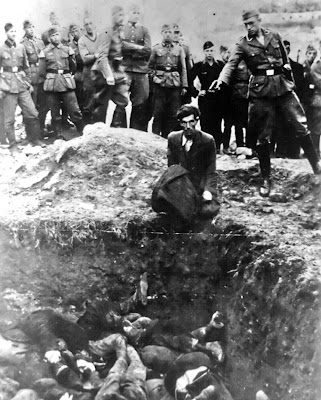 The famous photograph above is called The Last Jew in Vinnitsa. It was taken in Ukraine in September of 1941, when the Nazis shot every Jew in that city within five days. The flyers ordering Jews to register, distributed in Donetsk the other day, harken back to the Holocaust. All together, over 750,000 Jewish men, women and children, were shot to death in Ukraine during the war. Out of a population of 4.3 million, Donetsk currently only has 17,000 Jews. The flyers were a provocation of unknown origin, as opposed to a real threat, but they did make world news.

In Jerusalem, The Evangelical Sisterhood of Mary, a small order of Protestant nuns formed after the war in Germany, is closing it's retreat for Holocaust survivors. The order originally had come to Israel to work in hospitals as repentance for the Nazi crimes against the Jews.  Although the last of the survivors is passing away,  hatred is alive and well.
Posted by michael molovinsky at 7:21 AM

Apropos horrific holocaust descriptions read 10.4 Amok Time - What If Your World Goes Crazy? by clicking the Section 10.4 title here from http://physiciansnotebook.blogspot.com , It is even worse than the picture here because it is personal stories.
Dr Edward Stim
Bronx Expatriate in Tokyo