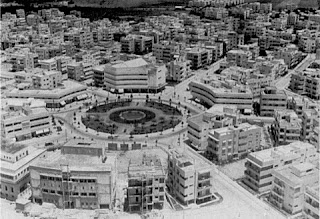 Urban planner Patrick Geddes had a unique opportunity in 1925, design a city which would actually be built. After the Balfour Declaration in 1917, which supported the concept of a Jewish homeland in Palestine, the pace of Zionist immigration picked up. In the early 1930's, threats from the Nazi Party accelerated immigration to the British controlled Palestine. The British Mandate extended from the defeat of the Ottomans in 1917, to the Israeli Independence in 1948. 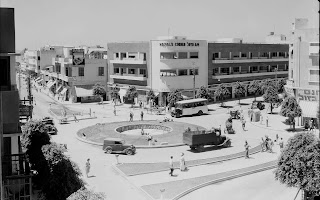 Among those fleeing Germany were students of Bauhaus movement in architecture, the unity of form and function, expressed in ways that were modern, simple and sparse. The reinforced low-rise concrete buildings curved around traffic circles and corners. 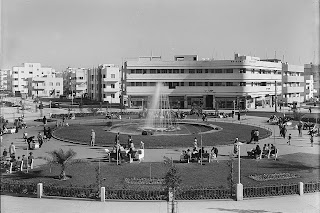 Between 1930 and 1939 both the migration and construction continued at a steady pace. The population had reached 200,000.

There was a unity in the planning and architecture seen no where else. Like any modern growing city, the the buildings have changed. Smaller, older buildings have been replaced with modern skyscrapers. Tel Aviv still remains the largest collection of Bauhaus buildings in the world. 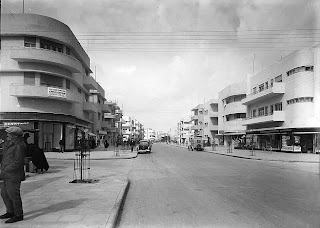 Bauhaus architecture was concerned with the social aspects of design and with the creation of a new form of social housing for workers. This may be just another one of the reasons it was embraced in the newly evolving city of Tel Aviv, at a time when socialist ideas were so prevalent. This style of architecture came about (in part) because of new engineering developments that allowed the walls to be built around steel or iron frames. This meant that walls no longer had to support the structure, but only enveloped it – from the outside. Called The White City, because of the white painted buildings, it is now a World Heritage Site.

Background and Coverage of the Tel Aviv Soccer Derby
reprinted from molovinsky on allentown
Posted by michael molovinsky at 4:49 AM

On tap this weekend with the continuing series of German Football at the Olympics is the year 1968.

The I.O.C. finally discontinued its folly of a "unified" German Olympic team --- but neither the Federal Republic or the German Democratic Republic qualified for the final Olympic tournament in Mexico City.

For the very first time, however, the nation of ISRAEL did ... this led to its one and only ever appearance to date at a FIFA World Cup final tournament --- two years later, also in Mexico.

In order to better prepare the audience for the Grand Finale of this series --- the 1972 Munich Summer Olympics --- a report on the contemporary state of the Israel national football team will be necessary.