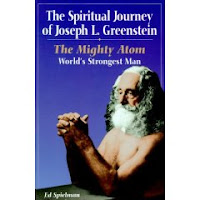 Years ago, at the Allentown Fair, as one would push through a sea of carney delusion, tucked back by the 4H animals, was an island of reality. There, in an old battered truck, an ancient Jewish strongman performed incredible feats of strength, to sell only homemade kosher soap. Standing on a platform on the rear of his truck, flanked by photographs from his performing youth, he would bent horse shoes and bite through nails. Many years earlier, my mother as a little girl in Bethlehem, saw him pull a truck uphill with his hair. Even as an old man, like a reincarnation of Samson, his grey hair was still long.
In the summers of 1964 and 1965, myself and a friend,(Fred Schoenk, retired Allentown art teacher) made and sold printed tee-shirts at the fair. We had the honor to know Joseph Greenstein(The Mighty Atom) and his wife. For those interested, there are various articles on the Mighty Atom and even at least one book.
Posted by michael molovinsky at 5:01 AM