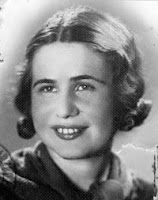 Irena Sendler was 30 in 1940, when the 400,000 Jews of Warsaw were herded into the ghetto and sealed off in the first step of the plan to exterminate them. In late 1942, after 280,000 had been deported to the death camp Treblinka, Sendler and others formed Zegota, a Polish underground council to aid the Jews. Sendler's heart-rending mission, was to explain to a Jewish mother, that the only possible way to save her child was to give the boy or girl over to her. She promised that after the war she would try to reunite the families. The children were secreted in convents, orphanages and with Polish families. Captured by the Nazi's and tortured, she was freed by the underground on her way to be executed. She had put the name of each child on a slip of paper, and buried them in a jar for safekeeping. After the war she did attempt to reunite the families, but almost all the parents had perished. Irena Sendler's remarkable courage has become widely known because of ninth grade school project in Kansas, Life in a Jar.

reprinted from molovinsky on allentown, May 25, 2011
Posted by michael molovinsky at 3:57 AM