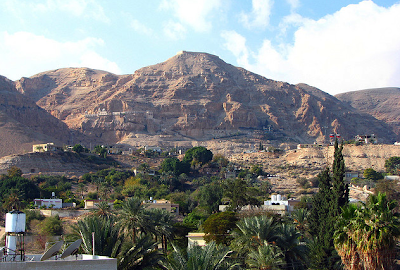 The Palestinian Authority unsuccessfully tried to increase tourism to Jericho last year, no rush, the town might be the oldest inhabited city on earth, 10,000 years. In 1895 the Greek Orthodox Church built the Mount of Temptation Monastery, where the devil tried three times to tempt Jesus during his forty days of prayer and fast. Steeped in both the Old and New Testaments, next to Jerusalem, it is the most excavated city in the Holy Land.

reprinted from molovinsky on allentown, December 12, 2010
Posted by michael molovinsky at 9:43 AM