The Last Jews of Egypt 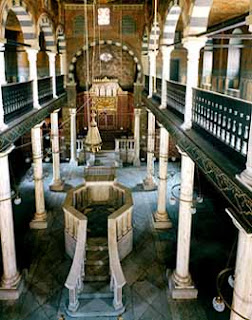 There are only a few dozen Jews still living in Egypt, all in either Cairo or Alexandria. The number of remaining synagogues outnumbers the remainder of Jews. Many of these synagogues are magnificent structures, and to the credit of the Egyptian government, they are protected and some are being restored. Prior to 1948, well over 80,000 Jews lived in the two cities. The current Ben Ezra in Cairo dates from 1892. The site, once a Coptic Church, became a synagogue in 882.. Tradition marks this as the spot where the prophet Jeremiah gathered the Jews in the 6th century after Nebuchadnezzar had destroyed the Jerusalem temple. The adjacent spring is supposed to mark the place where the pharaohs daughter found Moses in the reeds, and where Mary drew water to wash Jesus. It was here that the famous Philosopher Maimonides studied. Last century a collection of ancient manuscripts was discovered in the compound.

reprinted from molovinsky on allentown, June 10, 2010
Posted by michael molovinsky at 11:57 AM