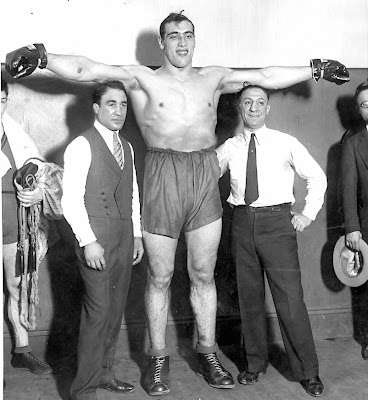 On July 4th, 1934 Joe louis made his debut as a professional fighter. Thirteen months and nineteen straight victories later, most by knockout, 62,000 fight fans would jam Yankee Stadium to watch the new sensation fight the giant, Primo Carnera.

New York, New York - Primo Carnera, giant Italian boxer and former heavyweight champion of the world, and Joe Louis, hard-hitting negro heavyweight from Detroit, Michigan, weighed-in this afternoon at the offices of the New York State Boxing Commission for their fifteen round bout tonight at the Yankee Stadium. - 6.25.1939

Although badly battered from the first round, Carnera would gamely stay in the fight till it was stopped in round six. The legend of the Brown Bomber was clearly established.

photo of Primo Carnera
reproduced from molovinsky on allentown, August 20, 2010
Posted by michael molovinsky at 7:29 PM