The Jews and Sarah Palin 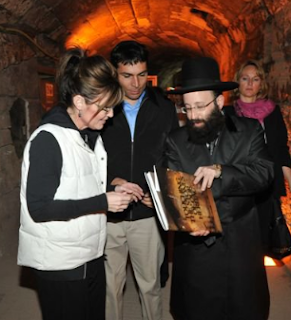 The media is pouring over thousands of emails from Sarah Palin's time as governor. Huffington Post wants readers to help, and point out anything unusual they discover. Perhaps they can find grammar mistakes, or better still, some incorrectly stated geography.

The local rabbi and I began corresponding about some insensitivity toward Jewish matters expressed in the hometown paper. A young man with a growing family, he hopes eventually to live in Israel. When McCain picked Sarah Palin in 08, he lost the rabbi's vote. Despite long term associations with outspoken anti-Semites, Obama captured 78% of the Jewish vote. The rabbi, and other Jews disturbed about Reverend Wright and other red flags, couldn't accept Palin's lack of sophistication. They joined the media elite in questioning her intelligence. After all, wouldn't she be one heart beat away from the presidency? Soon enough Joe Biden would be in Jerusalem telling Netanyahu where Jews could live. Not surprisingly, Obama would come to tell Netanyahu where he must begin negotiations. After all this, the rabbi might vote Republican in 2012, but only if they put up a good candidate. For Jews, it's apparently important, that Israel be compromised in an articulate fashion.
Posted by michael molovinsky at 5:57 AM