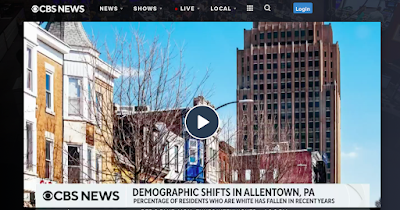 Last week CBS News ran a story contending that there was a correlation between cities with a large demographic shift, such as Allentown, and the January 6th insurrection at the Capital. Their camera crew came to Allentown and interviewed several people, including Gary Iacocca of Yocco's.
Because the story was Allentown centric, the Morning Call subsequently did a feature on the broadcast. I think that some unrelated issues were sandwiched together, creating a correlation* that doesn't exist.
The demographic shift in Allentown was a significant sociological event. Already twenty years ago, the New York Times noted it in a feature entitled The Latinization Of The Lehigh Valley.
The January 6th event was conducted by Trump cultists who bought into his deception that the election was stolen. The CBS program suggests that the rioters' depravity was connected to racist rage over the changes in their respective cities.
That's quite a sandwich of malcontent that they concocted.
* The correlation was supposedly discovered and studied at the University of Chicago.
Posted by michael molovinsky at 12:59 PM

I have not lived in Allentown in a long time. I'm not able to provide any first hand knowledge about the demographic changes that have occurred. I do know that the jobs that provided good wages and benefits for my family in the 1950s-1980s during my youth are long gone. Bethlehem Steel - gone. Ingersoll Rand - gone. Mack Trucks - mostly gone. General Electric - gone. Western Electric - gone. Even most of the knitting and garment factories - gone. I worked at Ingersoll Rand in P'burg in the 1970s and they paid 100% of the cost of my degree at Lafayette College taking night classes for almost 8 years. That benefit is long gone too unfortunately. I believe that the poverty and social problems in Allentown today may have more to do with the de-industrialization and lack of good jobs then the ethnicity of the folks that live in Allentown in 2022.