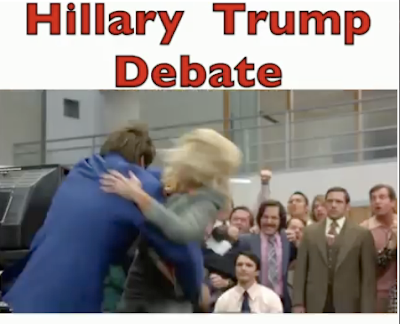 Recently, I did a post on the liberal hysteria about Donald Trump.  I put the piece on social media, and the group went crazy.  Rather than discuss the media phenomena to which I was referring,  they went right after Trump, as on cue.  I believe that this hysteria is fueled by their perception that indeed Trump may win the White House.  In another recent post,  I questioned the validity of the local college poll, which had Mrs. Clinton ahead by 9 points.  One week later, they report that the lead has shrunk to 3 points.  I believe that one week later, they realized what fools they had made of themselves, and decided to be more honest in their new tally.

We then learned that Mrs. Clinton will be prepared for the debate.  Two months ago, they considered the debate a joke,  after all, Clinton went to law school, was a senator and Secretary of State. Then, we learn that she will be prepared.  In other words,  they lowered the expectations about her performance.

Last night, after the 90 minute rumble, the pundits agreed in unison that Hillary had won. They found her more presidential, and felt that Trump went down too many rabbit holes.  They are wrong. Who won is who moves up and down in the polls. I believe that the upward move will be by Trump.  The public is not satisfied with the status quo, and has lost faith in damn statistics.  The case to be made was for change,  and Hillary failed to convince that she could bring any.
Posted by michael molovinsky at 4:20 AM