Rumble At The Reagan Library 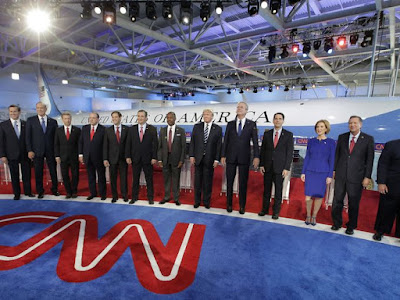 As a conservative independent, I have no use for Hillary Clinton, and less for Bernie Sanders. Even though I'll be late opening the bakery this morning, I stayed up last night and watched the debate. I was actually more impressed with the undercard. Sans Santorum, Pataki, Jindal and Graham were compelling. But, as Marshall McLuhan said, the medium is the message, and those gentlemen, relegated to the second tier in the second debate, are no longer part of the medium.

On the main card, the overly crowded field was almost like cage wrestling, too many people vying for camera time. In that regard, I felt that CNN had the camera on Trump a disportioncate amount of time. For foreign policy geeks, hearing that Trump will surround himself with experts, as opposed to being one, must be excruciatingly painful. I believe that if Marco Rubio could make himself appear older, he would be a real contender. I might send him some of my gray hair dye, it has helped me looked more distinguished. Getting back to McLuhan, Trump may have again stole the show by default. Although Jeb Bush was more aggressive, he only managed to play into Trump's portrayal of him as unenergetic. In that regard, Ben Carson appears to be self medicated. The other doctor, Rand Paul, also cannot shed the Trump barbs. Huckabee has cast himself more as a pastor than a viable politician. Both the governors, Walker and Kasich, failed to stand out. Ted Cruz presented himself well, but the media has marginalized him as too right for America. Although Christie held his own, he still looks like he caused that traffic jam at the bridge, trying to get to the donut shop before it closed. Certainly, Carly Fiorina also held her own, but I don't think that she has enough spunk to break through this large men's field.

I'm back to Marshall McLuhan and the persuasive media. If Trump produces some commercials which succeed in adding some world expertise to augment his bravado, the White House might become the next reality show.
Posted by michael molovinsky at 6:41 AM