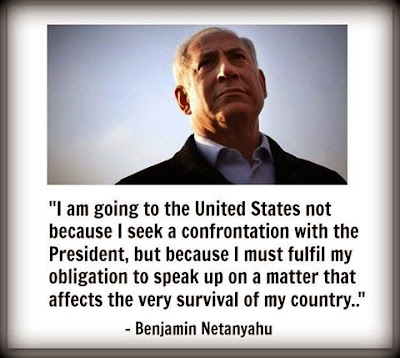 Netanyahu's speech to Congress, scheduled for early March, has become a point of multiple controversy. Did Boehner invite Netanyahu as a partisan to embarrass Obama? Did Netanyahu accept for political purpose back in Israel? Is the invitation and speech so diplomatically uncomfortable as to constitute disrespect to United States? One thing for sure is that there is much more consequence for Israel than United States with any nuclear deal made with Iran. As the United States becomes involved in the ever changing dynamics of the Middle East conflicts, it is Israel which is in the cross-hair of Iranian produced missiles, not America.  According to Netanyahu, “Iran continues to forge ahead through the rubble of the new Middle East; it has already taken over four capitals, Damascus, Beirut, Baghdad and now Sana’a. Now it wants to open a third front from the Golan Heights.” Netanyahu said that if that was the way Iran acted without nuclear arms, “Imagine what it will do when it has nuclear weapons.”

Under the dire circumstances facing Israel, I do not find Netanyahu's speech either political or undiplomatic. However, I believe that those terms apply to our Congress members who choose not to attend.
Posted by michael molovinsky at 3:42 AM