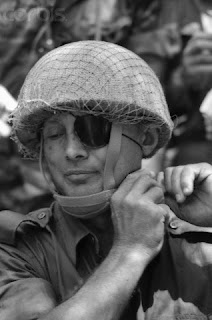 Moshe Dayan on born on a kibbutz near the Sea of Galilee in 1915. When he was 14, he joined the outlawed Haganah, an underground defense force to protect Jewish settlements from Arab attacks. Although caught and imprisoned by the British for two years, he would fight for them in Lebanon during WWII, losing his eye. In the 1948 War of Independence, he fought on all the fronts, defending Israel; by 1953 he was Chief of Staff of the Israeli Armed Forces. In 1956 he led the Suez Campaign.

In 1967 he was Defense Minister for the Six Day War. He remained in that position through the War of 1973. Although a genuine hero in every sense of the word, he was held responsible for the initial success of Egyptian forces in the surprise attack on Yom Kippur (1973), and would resign from his position.

Israel is too small of a country, and it's enemies too numerous, for any miscalculations regarding it's security.

Posted by michael molovinsky at 8:56 AM