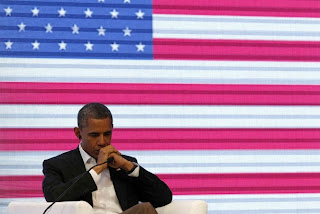 I believe it's safe to say that the leaders of South America found President Obama unimpressive. Propelled to the Presidency on his speaking abilities, anointed with a Nobel Prize on pure speculation, he has failed to have any gift beyond the spoken word. It is articulate babble. In Colombia he blabbered that the cold war is over, yet defended the embargo against Cuba. His position against the legalization of drugs frustrated the Latin American leaders, overwhelmed by the illegal drug activities in their countries. His promotion of a trade program frustrated American labor leaders. His description of a month delay in talks with Iran as progress, frustrated Israel. The Secret Service indiscretion was not the biggest embarrassment on his trip.
Posted by michael molovinsky at 5:14 AM

Nice to become a member of the Chronicles blog. I agree with every negative you write about Obama. As a former True Believer (cf. Eric Hoffer, 1951) who learned the hard way about this incompetent, ignoramus, opportunist first black president, I hope we never have another one like him and I applaud your indepedent stance.
Dr. Edward Stim (M.D.)
Tokyo Japan
http://physiciansnotebook.blogspot.com
http://adventuresofkimi.blogspot.com