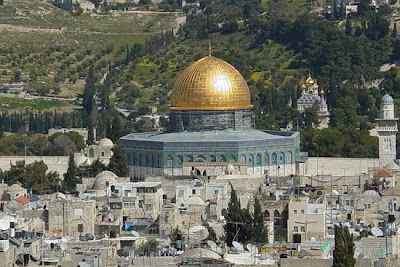 In the city of awe-inspiring sites, the most imposing is The Dome of the Rock. The Dome covers the Rock from which Muslims believe the Prophet Muhammad ascended to Heaven to receive a message from Allah. The Jews believe the rock is the Foundation Stone, from which the world was created. On it, Abraham was prepared to sacrifice Isaac and the Ark of the Covenant stood when the Temple occupied the Mount. The Mount and Temple was enlarged by Herod, during the lifetime of Jesus. 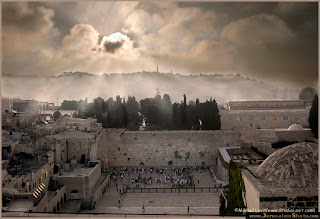 Jews pray at the retaining wall, The Western Wall, which survived the Temple's destruction by the Romans in 70 A.D. The bottom four rows of stones date from Herod, below current street level, there are 17 more layers. 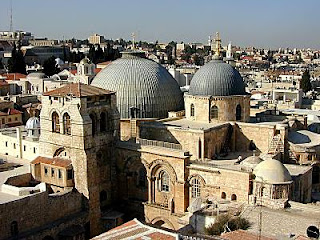 The Church of the Holy Sepulchre is west of the Temple Mount. The first church was built on the site in the 4th century. Christians believe the church encompasses both the sites; where Jesus was crucified, and also buried and rose from the dead.

reproduced from molovinsky on allentown
Posted by michael molovinsky at 4:50 AM